So, what is meant by a dystopian world? I certainly had no idea when I drew the first line across the top of the page and wrote down my new book’s title, The Wealth of a Nation; it came by impulse, but subconsciously chosen for reasons that instantly appeared relevant.

The evening before, I was sitting on our patio, watching the Sacramento Valley’s sky turn a powdered turquoise, a puffed pink just over the hills, the pink alighting cumulus above. One hundred and forty degrees of pure pastel beauty. Drinking scotch, perhaps, added liquid warmth to the view. I’d been worried, over the last hour, until an idea engulfed me in the evening calm. 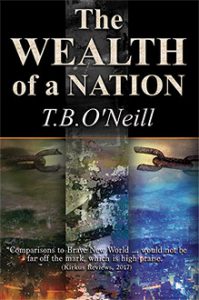 Yes, I had been worried. Been ruminating about the loss of jobs predicted to increase to levels never before seen in our country. It is said, by those who should know––the titans of the tech industry––that we will lose forty to seventy percent of our current jobs in the near future, to be replaced by computers, outsourcing, and robotization. Ironically, this very worker to be cast aside is expected to welcome this new prosperity and leisure. They point out that already the computer age has ripened to the degree that cell phones make bank deposits, farm machinery picks peaches from trees, and robots flip burgers. The digital age has arrived. With it, complex logistics have been solved, ushering in the age of globalized industry and markets. And these forces are unstoppable.

You see, as a lawyer in Oregon, I witnessed something akin to what will soon come on a much larger scale: the death of a proud industry––logging, lumber and paper mills, to be exact––rendering its workers one indignity after another as companies, communities, and hard-working  families were decreed disposable, and never recovered.

As the ice melted into tiny continents in my tumbler, I let the scotch warm my throat, watching the sunset peel light away and join the calm of California’s colored dusk. In that moment I decided to replace worry with action, to address the subject in a novel. Not about the changes required (the displacement and desperation), or the promised wealth of the coming era, but about our dignity; how we attain it, how we maintain it, and how productive work nurtures us.

The development of an idea inevitably starts with questions: How does American Democracy fit into the picture? What skill level will you need to find a job in this promised utopia? What will happen to those without educations, without the skills, inclination, or ability to work indoors punching code on a keyboard? What will happen to those of us on the left side of the IQ curve? Will society finance the legions of unemployed, their families, their parents, and their children?  If we hand out checks, will they accept it? The smartest and most productive will be a minority, the new worker, but are they willing to pay the entire cost of society? How will that work? Who wins in this exchange? The worker or the recipient of the fruit of the worker’s effort? How will the authorities pull it off?

The answers to these questions, conjured primarily from deduction, didn’t lead me to celebrate. It led me to be wary, left me with a touch of fear. But mostly I felt sadness. The politicians and Silicon Valley trendsetters have made their bet, put down their stake, gambled that the Brave New World they envision will offer shinier, tastier, cheaper stuff. They will tempt us. They are certain that this powerful force can’t be denied. Of course, the makers of products don’t ask if we need their widget, or even want it; they take it upon themselves to sell it to us, often replacing something functionally similar––filling the void of desire for the sake of desire, satisfying the addicted consumer. Thus the commercial world works miracles.

I’m not opposed to miracles. I’m opposed to paying for them when simultaneously making my countrymen poorer and more dependent. I’m opposed to living without the dignity of work. Opposed to people never experiencing the satisfaction of being productive, sharing in the pain as well as prosperity. I’m fearful of a new caste system, necessarily predicted by these same economic saviors––the black tee-shirted tech barons of the twenty-first century.

That was the disquiet I felt when the idea first gelled, that evening on my patio. Still is. The Wealth of a Nation is the result.  It doesn’t answer the question about what constitutes a dystopian world (I hope to address that in a coming post), but it frames the problem. Like Supreme Court Justice Powell once said: “I can’t define pornography, but I know it when I see it.” To actualize their dream, the politicians and tech barons may be guiding America to a dystopian, rather than a utopian, future. My bet is that we will know it when we see it.